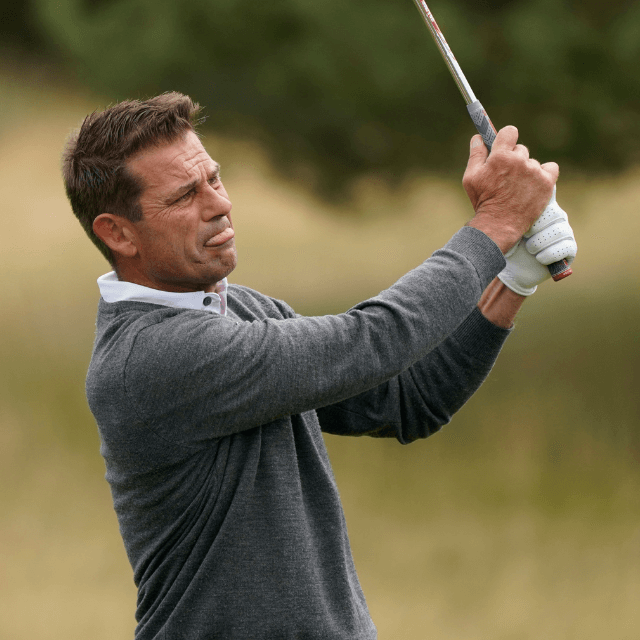 Sven Strüver takes the early lead after round one of the WINSTONgolf Senior Open after posting a five under par round of 67, ahead of Australia’s Richard Green and Spain’s Carl Suneson.

The three-time DP World Tour winner started his round quick out the starting blocks with four back-to-back birdies from the third to the sixth hole and adding another birdie to his card on the eighth meaning he headed into the back nine on five under par.

“I just enjoyed it,” Strüver said. “My intention was just to enjoy it. I was here on Sunday practicing playing nine holes getting a sniff of everything and obviously when you don’t play much you haven’t got all your shots in the bag but it’s coming day by day.

“Today was a good day I was lucky a little on the front nine and then on the back nine I wasn’t so lucky with the putter I could have had more that’s the strange thing on the front nine everything went my way back nine it was okay but nothing special.

“You get your confidence back suddenly and then you just go for the pins and then I must admit that it is bad that it is only five under!”

Strüver focused on the concentration side of his game today, ensuring that the ball landed as close to the pin as possible however it took extra awareness and understanding of the course especially with the fierce wind that tormented the course today.

“I would say today it was suited to my game because I couldn’t look at my swing or technique or whatever it was just pure concentration on how the ball should fly and it doesn’t matter if the clubface is open and that was the good thing today that I just didn’t think about my golf swing.”

In joint second place is the in-form Richard Green and Carl Suneson on four under par, closely followed by last week’s Swiss Seniors Open champion and the winner of the WINSTONgolf Senior Open invitational in 2021, James Kingston on three under par. He is joined by former Ryder Cup player Phillip Price and Gary Evans of England also on three under par.

The second round of the WINSTONgolf Senior Open will begin at 9:00am local time with Strüver teeing it up at 11:27 with Austria’s Gordon Manson.

CLICK HERE for more details on the WINSTONgolf Senior Open.