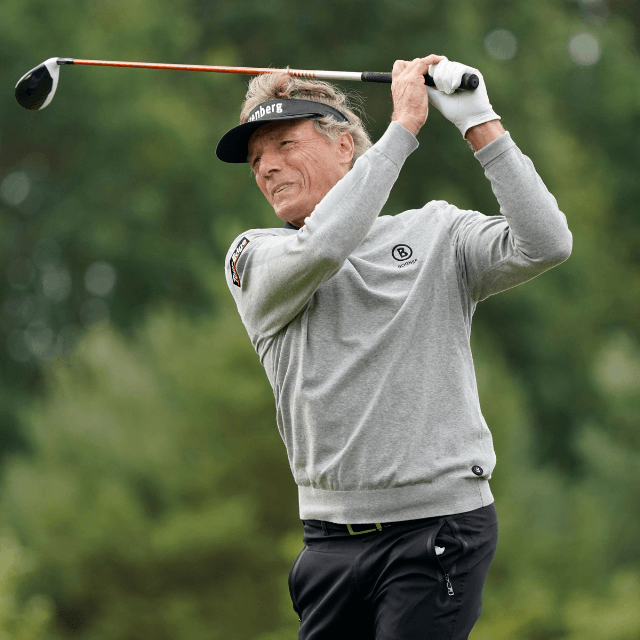 Langer is enjoying being back on home soil at WINSTONgolf after posting two rounds of 70 and 69, and today recording not one single bogey in his quest to win his first WINSTONgolf Senior Open.

The German says it may come down to a good break or a bad break on the final day tomorrow however after 50 years of playing professional golf it is always key to not think too far ahead and take each day as it comes.

“Everything was pretty good except the putting was not great earlier,” Langer said. “Towards the end I putted a little better, ball striking was very nice earlier on and then got a couple of loose shots towards the end, but it was very windy today and cold earlier on so if you look at the conditions it was a very good round.

“I think I am playing fairly well so it all depends on how tomorrow goes, a good break here or a bad break could make all the difference but it’s not that there’s just two or three of us there’s probably still eight or 10 of us in the hunt.

“You never think ahead in golf, after 50 years of being a pro you learn that quickly that you try and stay in the present and not think ahead at all.”

James Kingston also will take the joint lead heading into the final round tomorrow and is the man in-form having won the Swiss Seniors Open last week but admits that it was a tough day as the wind was a huge factor throughout.

“I feel like I have been playing nicely I like the golf course,” Kingston said. “The setup here today was a really tough day though the wind gusting up to 25mph so it was really tough, hitting the right club and figuring out what the ball was doing in the air to try and get it close. You could see by the scores guys are struggling out there.

“The course is great, the greens are really good, it’s beautiful out there it’s a beautiful parkland golf course.”

Gary Evans also posted a two-under par round of 70 like Kingston and admits patience was the key as it did get difficult in places especially when trying to be as accurate as possible.

“It really is tricky out there, hitting the fairways is premium but even with that your second shot into these greens you’ve got to be so accurate to hit the middle of the green and often and hitting it to 20 feet is a really good shot so it’s just accepting it and being patient and that was the story of the day.”

The final round of the WINSTONgolf Senior Open will begin at 8:11am local time with Langer teeing it up in the final group at 9:50 alongside Evans and Kingston.

CLICK HERE for more information on the WINSTONgolf Senior Open.