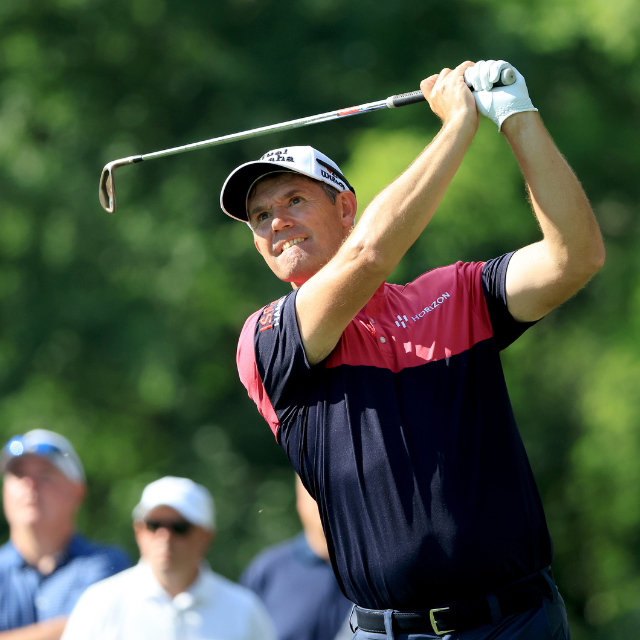 Padraig Harrington reeled off six birdies in a bogey-free round on Friday afternoon to take the 36-hole lead over Steve Stricker at the 42nd U.S. Senior Open at Saucon Valley Country Club.

Padraig Harrington overcame a broken driver and what he called a rough patch mid-round on Friday to post a 6-under-par 65 and take the 36-hole lead by one stroke over 2019 U.S Senior Open champion Steve Stricker.

Harrington is making his first U.S. Senior Open debut, weathered a rainy Round 1 on Thursday morning, then reeled off six birdies in a bogey-free round on Friday afternoon, with three of the birdies coming in a five-hole stretch late in the round.

Harrington noted “a bit of drama” when he broke his driver in the middle of his pre-round warmup. “I had to replace the driver I played with yesterday, and this one flew a little higher, a bit more spin, so it was a little different,” said Harrington. Though it didn’t affect him.

Stricker leads the chasing pack having followed up an opening round of 3-under 68 with a 2-under 69 on Friday. Rob Labritz, a former club professional who earned his PGA Tour Champions card in December, is alone in third place after shooting his second consecutive 2-under 69.

Miguel Angel Jimenez, a two-time runner-up in the U.S. Senior Open, shot the low round of the championship thus far on Friday, a 7-under 64, bettering his Thursday effort by 15 strokes to move into a tie for 22nd place.

Markus Brier and Richard Green both shot second consecutive 71s to remain level par and in the hunt to claim their first Senior Major Championship.