The Legends Tour will continue to build on its star quality with a global 2023 schedule which features exciting debuts for two stunning links venues, in Scotland and in Ireland, and increased prize funds across the board for many of the game’s most decorated players.

The 2023 season will feature at least 18 tournaments with a record-breaking prize fund – with final numbers set to be released shortly – which will be a significant increase on the 2022 campaign.

Among the exciting developments for 2023 is the news that the spectacular Trump International Golf Links Aberdeen will host the Tour for the first time when the Staysure PGA Seniors Championship is played from August 24-27.

The Scottish venue is joined on the schedule by another breath-taking links newcomer, with Seapoint Golf Links – a rising star in the ranks of Irish links courses and located on the East coast, just an hour north of Dublin – set to host a major international professional event for the first time from June 22-24.

The JCB Championship will return from August 4-6 after a glorious debut in 2022, when a host of superstars including Ernie Els, Retief Goosen, Darren Clarke and Paul Lawrie descended upon the spectacular Uttoxer venue, with Germany’s Alex Cejka finishing two shots clear of Irish star Paul McGinley to lift the title.

Among the other returning highlights on the new-look schedule are July’s Swiss Senior Open at Golf Club Bad Ragaz, the WINSTONgolf Senior Open in Germany in September, the Italian Senior Open in October and November’s Farmfoods European Senior Masters in Spain.

A new English event, the Legends Tour Players Championship, will be held for the first time in 2023, joining the JCB Championship and the Jersey Legends in a triumvirate of confirmed UK-based tournaments.

Major glory may be on the cards for the biggest stars of the Legends Tour, with the Senior Open Championship Presented by Rolex visiting Royal Porthcawl Golf Club in 2023, while the KitchenAid US PGA Senior Championship will be played at PGA Frisco, Texas and the US Senior Open will take place at Wisconsin’s SentryWorld Golf Course.

The Tour will once again close with the MCB Tour Championship Mauritius, which has provided a fitting finale to the popular competition for more than a decade. At the 2022 edition of the event, staged earlier in December, South African James Kingston lifted the John Jacobs Trophy as the Order of Merit leader despite an impressive display by tournament winner Thomas Bjørn.

Many golfers hoping to make their mark on the Legends Tour in 2023 will have to first prove themselves at the Tour’s Qualifying School this month, which returns for the first time in three years. The venue for the high-stakes event will be Gloria Golf Resort in Belek, Turkey, where players will battle it out to earn one of five spots on the Tour.

Phil Harrison, Legends Tour CEO, said: “Since rebranding as the Legends Tour in 2020, our central ambition has been to keep growing, and this 2023 schedule is another incredibly exciting step forward in the evolution of our Tour, with some exciting tournament announcements still to come in the New Year.

“We have some stunning new venues to add to the long list of world-class golf courses which we visit on an annual basis. We are thrilled that, for the first time, our players will compete on two spectacular links venues in Trump International and Seapoint Golf Links, while the addition of the Legends Tour Players Championship means another big event for the famously passionate British golf fans.

“We extend our thanks to all of our host venues, sponsors and partners for being part of this journey and we look forward to welcoming them back in 2023 for what is set to be an exhilarating season for our players, our celebrities and our fans.”

The Legends Tour is the brainchild of entrepreneur Ryan Howsam, who bought a majority stake in the then-named European Senior Tour and set about rebranding the Tour in 2020. A prestigious competition featuring some of golf’s finest players aged 50 and over, the reimagined Legends Tour became a fan favourite and promises to be better than ever in 2023. 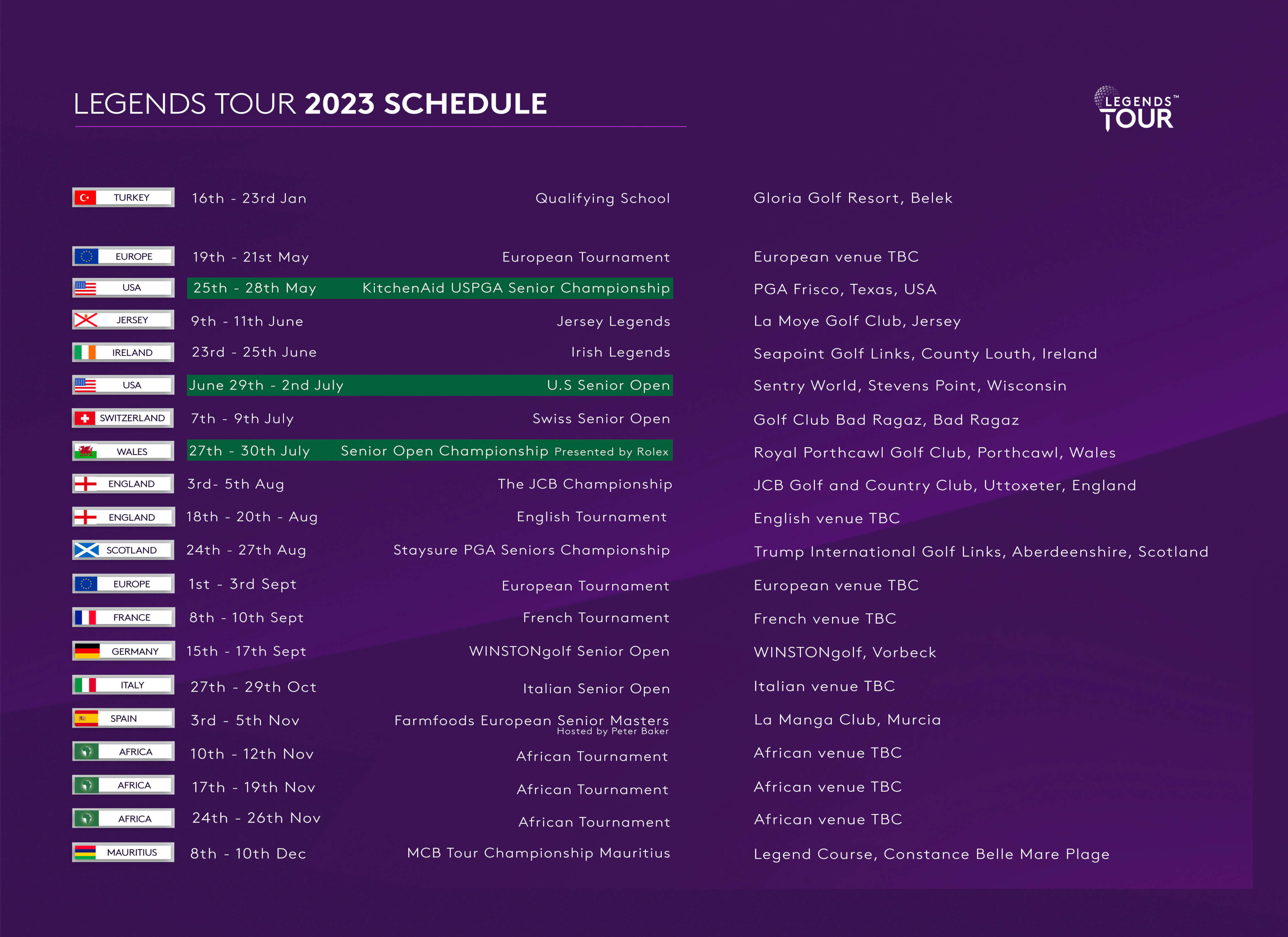