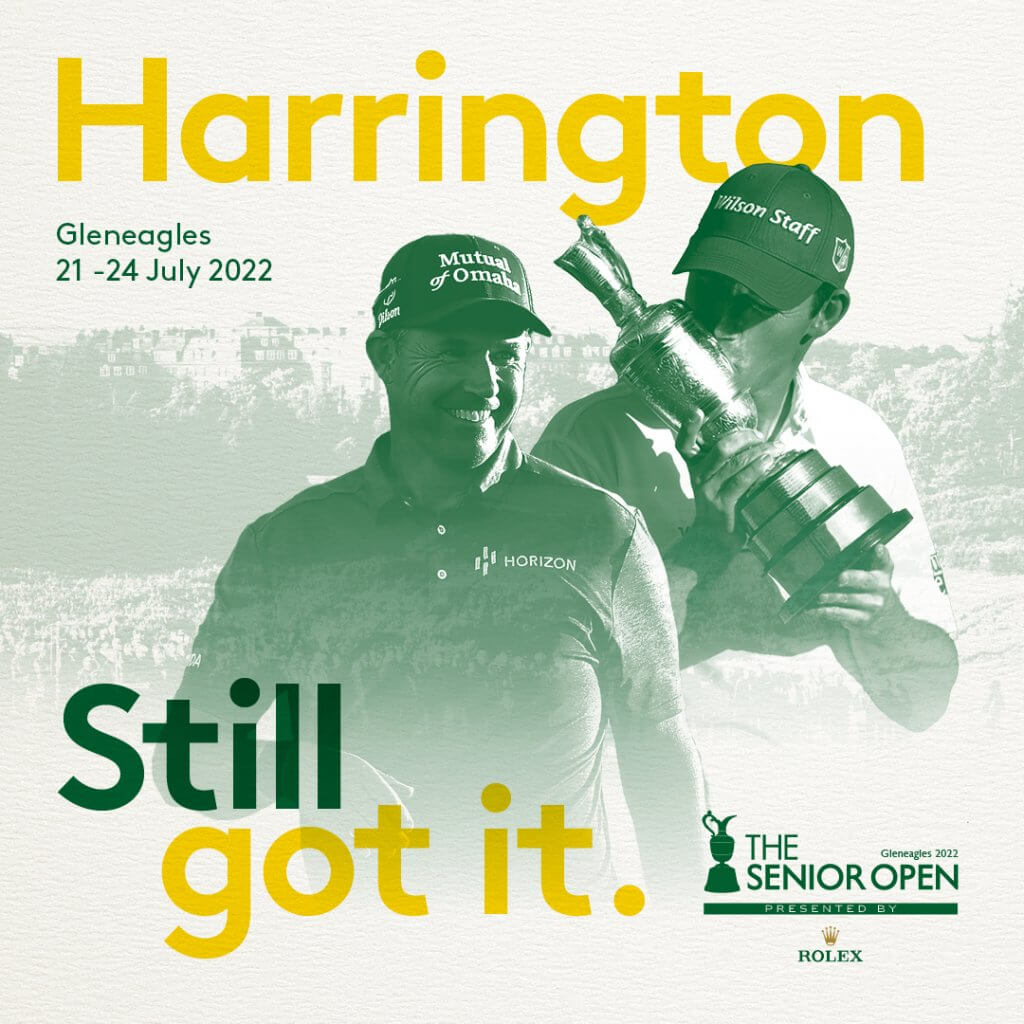 Padraig Harrington will make his debut at The Senior Open Presented by Rolex in 2022 when he joins a host of fellow Open Champions at Gleneagles from July 21-24.

The two-time winner of The Open will make his Senior Open bow in Scotland, the Home of Golf, alongside fellow double Open Champion Ernie Els, as well as Darren Clarke, Tom Lehman and Sandy Lyle, who have all lifted the Claret Jug.

The Senior Open will visit Gleneagles for the first time in 2022 as the 2014 Ryder Cup venue welcomes the stars of the over-50s game for Europe’s only Senior Major Championship.

Harrington, and his fellow Open Champions, will bid to become only the fourth player in golf history to lift both the Claret Jug and the Senior Open trophy when he tees it up in Gleneagles in July, with only Bob Charles, Gary Player and Tom Watson achieving the feat to this day.

The Irishman, who turned 50 last year, has 32 professional victories to his name, including back-to-back Open Championships in 2007 and 2008, forming part of a stunning run of form which included the US PGA Championship in August 2008, and he is now ready to attempt to add a haul of Senior Major Championships to his CV.

“I am excited to be making my debut at The Senior Open and to be able to do so in Scotland is very special. I always love playing there and it holds precious memories for me as the country of my first Major Championship win.

“It will be a pleasure to be back at Gleneagles. It is a great venue and I have fond memories of being there as a Vice Captain at the 2014 Ryder Cup.

“My earliest memory of the King’s Course was when watching Peter O’Malley make two eagles and three birdies in the last five holes of the final round to win the 1992 Scottish Open in a dramatic finish.

“I love the buzz that surrounds a Major Championship, and I am looking forward to the challenge and bidding to add more titles to my collection.”

Tickets to see the world’s best over-50s golfers in action at Europe’s only Senior Major Championship are on sale now.

Ticket prices for The 2022 Senior Open Presented by Rolex start at £20 on the Wednesday practice day, while season tickets, offering access to all four Championship days at Gleneagles plus the practice day, are priced at £110.

Tickets can be purchased by CLICKING HERE and it is recommended to buy tickets in advance due to the high demand for the tournament and the limited capacity on-site.

Hospitality experiences are also available this July, offering the chance to soak up the Gleneagles atmosphere in style, please follow this LINK for more information.