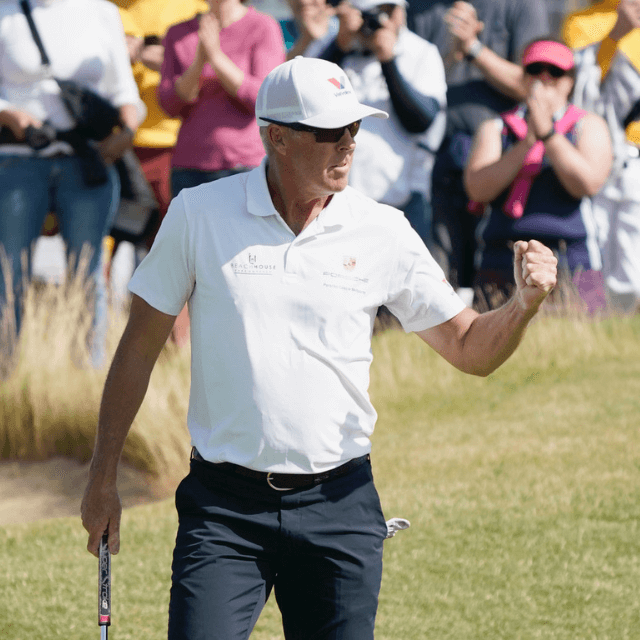 Richard Green remained consistent at the WINSTONgolf Senior Open prevailing on the fifth play-off hole at WINSTONgolf against Phillip Archer of England to secure his second Legends Tour title of the season.

The Australian has made an emphatic start to his Legends Tour debut season following his maiden win at La Moye Golf Club last month securing the Jersey Legends title in a play-off with 1999 Open Champion Paul Lawrie.

Green admits it feels fantastic to win twice in a season and is delighted with how his game is playing right now especially having the confidence knowing that he can contend heading into most tournaments at the start of the week.

“On top of the world it feels fantastic,” Green said. “I’ve not won twice in a season before its usually taken me a decade to get another win under my belt but to win twice this year is fantastic, I loved it in Jersey, and I’ve loved here too.

“I’m pleased that I went home after the U.S. Senior Open worked on a few things and got them right and I’ve come back, and I feel like I’ve got it where I want it to be to contend again so it’s good.”

Green and Archer parred the first four holes playing 18 three times and the 10th once, heading into the fifth play-off hole where Green made birdie, sinking a five foot putt and admits patience was key in order to prevail in these crucial moments.

“It’s difficult,” he said. “If it doesn’t happen really quickly say the first hole it just comes down to patience so I just kept telling myself you’re good enough to do this just be patient just wait for your opportunity, keep hitting good golf shots which I was fortunate enough to do, I had a couple of shaky putts but was fortunate enough to make the next one so I kept myself in it and that opportunity at the last was a great wedge shot.

“I just thought I am standing over this putt I’m just going give this a go, you’ve got to give this a go it’s just patience when it’s going on like that for a long time but your adrenaline everything’s pumping you’ve just got to try and remain focused.”

The Legends Tour now heads to Scotland for The Senior Open presented by Rolex at The King’s Course, Gleneagles for the only senior major on European soil from July 21 – 24.

CLICK HERE for more information on the Legends Tour.