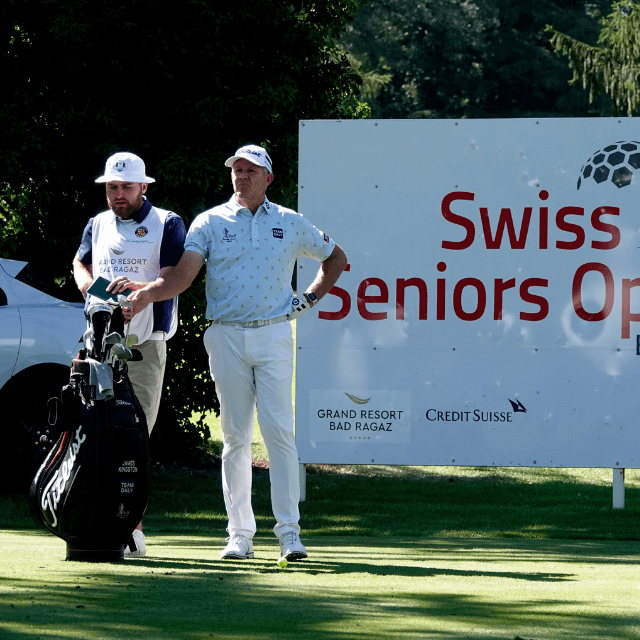 James Kingston will take a two-shot lead into the final day of the Swiss Seniors Open posting an impressive blemish free seven under par round of 63 at Golf Club Bad Ragaz.

The South African kept his consistency well and truly flowing, following on from a blemish free round on day one in Bad Ragaz and managed to maintain that heading into moving day today.

The two-time Legends Tour winner has recorded two top 10 finishes this season already including a second place finish at the Riegler & Partner Legends, but admits that the hard work he has been putting in results in him playing well under pressure.

“That’s what we practice for and that’s why we work hard to get ourselves in these sort of situations,” Kingston said. “It’s not always easy but the fact that you are now playing well, and you are now in the lead or close to the lead or whatever it may be but that is what we prepare ourselves for and when we find ourselves in that position I think that brings the best out of us and that’s all we can do, is give it our best tomorrow.”

“It was a nice day, I played pretty solid, I kept the ball in play and I think you mentioned earlier, two days without a bogey its solid golf, yesterday felt like I let a few by not making any putts but today I made one or two and kept playing solid and gave myself a lot of opportunities and if you keep doing that you’re bound to make one or two.”

“I’ve kept the ball nicely in play off the tee, and I’ve given myself a lot of opportunities from there, I tried to play some of the holes a little more conservative that I have done over the years, I’d rather hit the shot on the fairway and by putting it in play and you might have a slightly longer shot but at least you’re coming in from the short stuff and obviously that made a difference.”

Kingston has enjoyed his two rounds at Golf Club Bad Ragaz and believes that it is suited to his game, especially with the weather being on his side, having two days of stunning sunshine shining down on the foothills of the Alps in the eastern part of Switzerland.

“I think a lot of guys enjoy the golf course it’s suitable to a lot of different players, you don’t have to be extra-long on this golf course, you’ve got to keep it in play, it sort of dictates to you what you should do on certain holes, some holes give you the option of pushing the limits a little bit but in general if you keep it down the short and narrow and give yourself as many opportunities as possible

“The course is good it is in great shape, the weather is unbelievable, we are having a great week here.”

A shot further back on a six under par total was Argentina’s Mauricio Molina and Peter Baker of England.

The final round of the Swiss Seniors Open begins at 7:30am local time with Kingston teeing off at 11:10am in the final group with Phillip Price and David Shacklady.

CLICK HERE for more information on the Swiss Seniors Open.