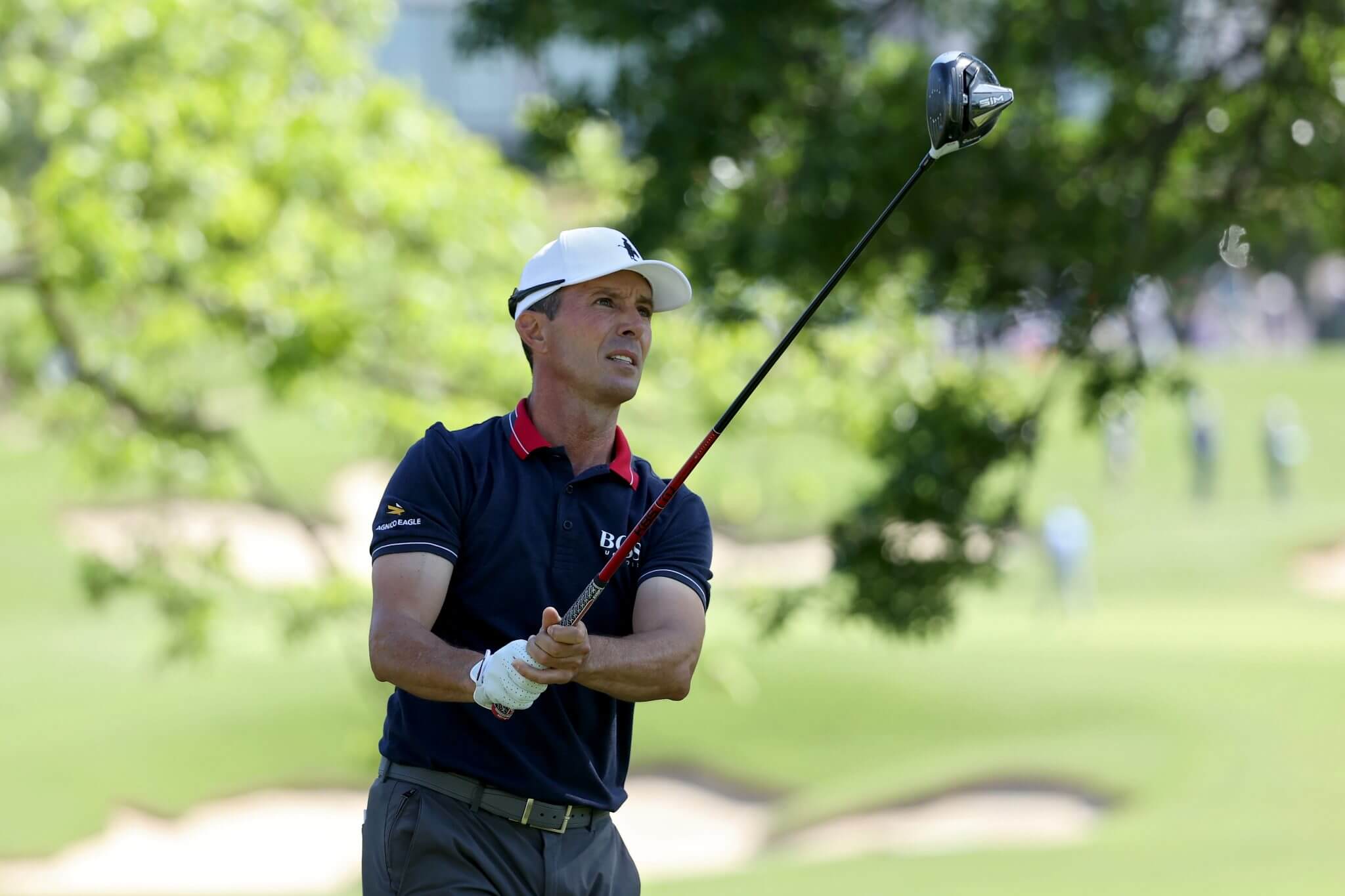 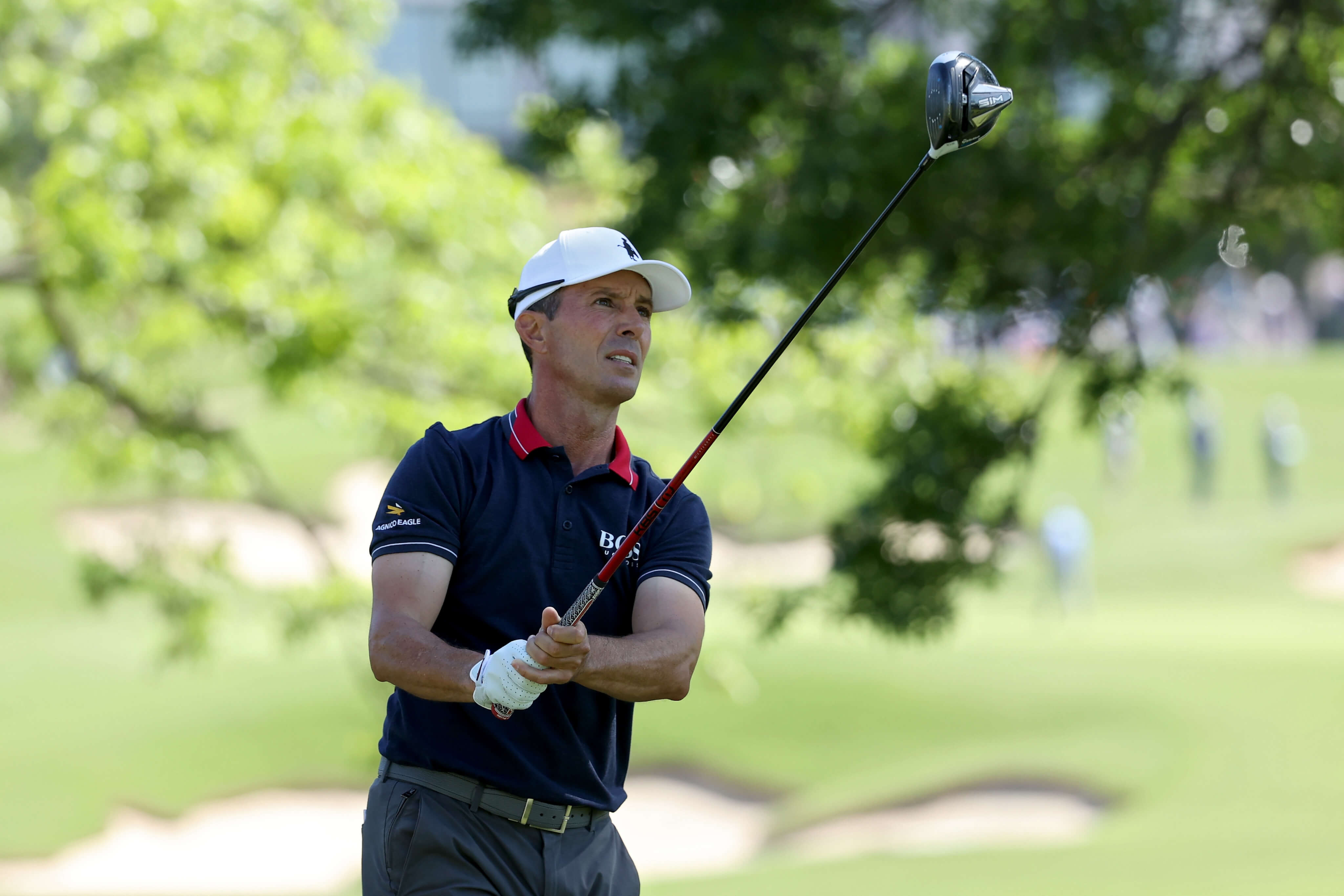 Weir posts second round 65, leads by 4 heading into the weekend at Southern Hills

Mike Weir has made six birdies in both his first and second rounds at the KitchenAid Senior PGA Championship.

The good news for Weir is that he made fewer mistakes in his second round, and his cleaner scorecard led to a 5-under 65 on Friday – the round of the Championship so far.

While Weir’s six birdies Thursday were off set by four bogeys, Weir had just one blemish on his scorecard on Friday.

“It was a really fun round of golf. Very demanding golf course, so when you have your opportunities and take advantage of them you feel good because you know you’re going to be fighting for some pars on some holes,” said Weir. “But all aspect of my game was a little bit sharper today. I drove it a little better than yesterday, putting was still solid, I probably hit some iron shots a little closer to the hole today than yesterday and that’s why I got 5-under.”

With a handful of golfers left on the course to complete their second rounds on Saturday – and with play suspended due to darkness at 8:31 p.m. Central Time after weather impacted the opening round on Thursday – it’s the Canadian who is leading the pack.

Weir, who won his first PGA Tour Champions event earlier this month, said it was nice to play Southern Hills, a stout major-championship test, well. Weir finished in the top-20 at the 2001 U.S. Open at the iconic Tulsa layout but missed the cut at the 2007 PGA Championship.

“I remember being pretty disappointed,” said Weir of his 2007 effort. “It was a Presidents Cup year, it was a big tournament for me to not play well, and so I remember that. And I wanted to see the golf course, obviously it’s a little bit different, but still very challenging, very difficult around the greens and I managed around it.”

Weir is being chased by a foursome of golfers at 3-under including John Riegger (who is through 15 holes of his second round), Alex Cejka, who won the first major of 2021 on the PGA TOUR Champions schedule, Rocco Mediate, and Ryder Cup Captain Steve Stricker.

Stricker shot a 2-under 68, highlighted by an eagle two on the par-4 10th. He had 107 yards into the flag and admitted he was in between clubs, but knocked a wedge into the hill and it skipped up and in.

“That’s just a bonus. You don’t expect anything like that,” said Stricker. “But it was a nice shot and got me going.”

Stricker bogeyed his final two holes of the day and admitted that left a “sour taste” in his mouth heading into Saturday. He said he did do a lot of good things on Friday, however, including rolling his putts better – this despite switching to a different putter on Wednesday, the night prior to the tournament’s opening round.

“I wasn’t getting my normal putter to really roll all that well. It wasn’t heavy enough on some of these putts up the hill,” explained Stricker. “So, I went with this mallet style putter that it’s actually been really good, I’ve hit a lot of nice putts, I’m rolling the ball nicely.”

Stricker is looking for his third PGA Tour Champions major title while Mediate and Cejka are looking for their second. Mediate won the KitchenAid Senior PGA Championship in 2016.

He acknowledged it was a bonus to make birdie on 16 (“It was ridiculous,” he said, pitching in from a bunker with a terrible lie) but 18 he called one of his “favorite par-4’s in the world” and he was happy to walk away with a day-ending birdie.

Mediate said he’s playing with lots of confidence right now after pivoting his attitude. He went home for a few weeks, he admitted, and just got himself “together” to prepare for this week. And so far, so good.

“To come out here and do this on this golf course it’s fantastic,” said Mediate. “Whatever happens the next two days, it’s going to be tough again and you got some of the best players on the planet playing here so it’s just going to be fun again to go out and see But yeah, it feels good knowing that I won (the KitchenAid Senior PGA Championship) and if I can get in there for Sunday late, who knows.”

First up is Saturday, however, and the chase of Mike Weir is very much on.