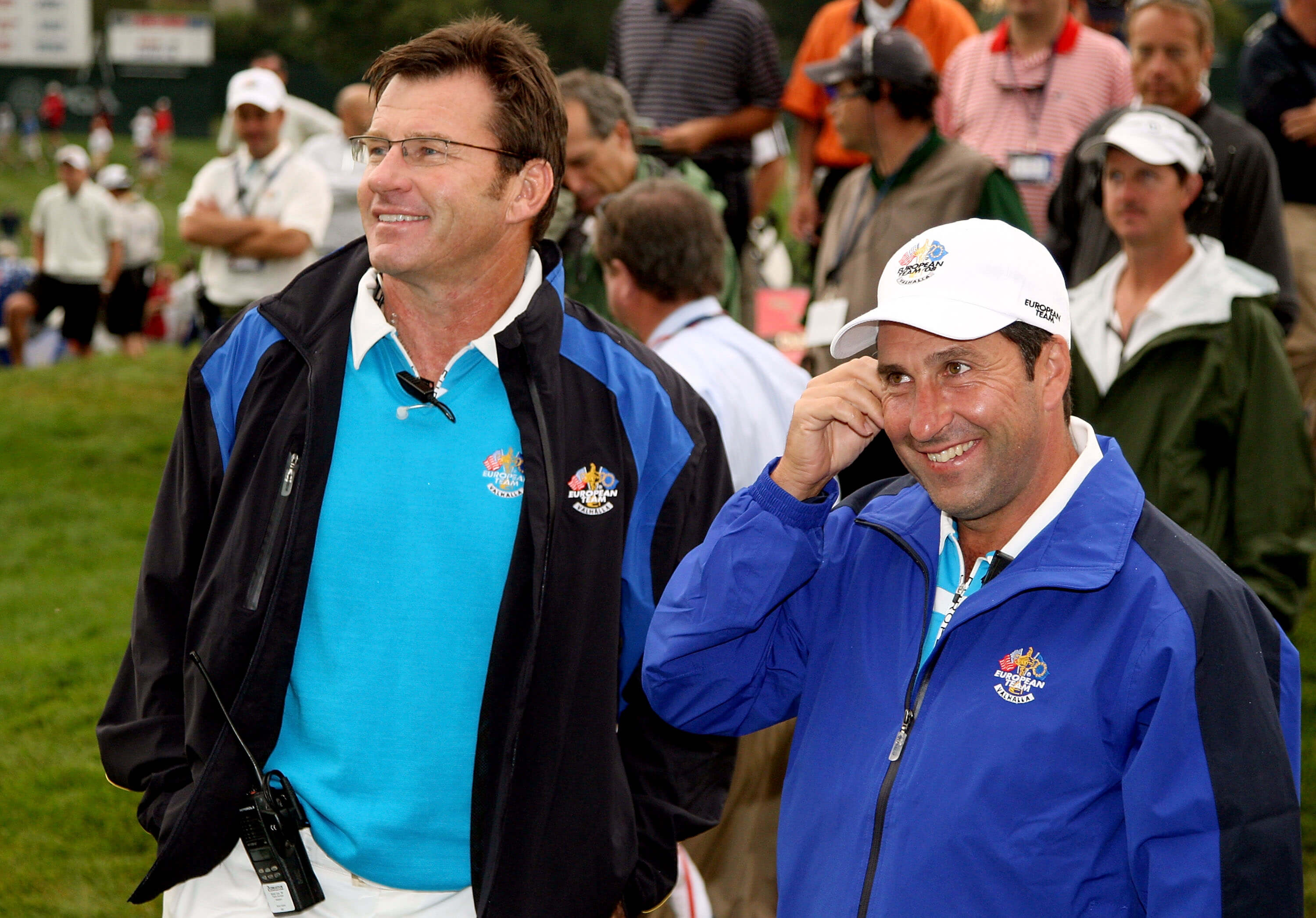 The success of the Legends in the Ryder Cup

The 43rd Ryder Cup will begin on Friday and what better way to prepare for the biennial contest than by recalling the success of Legends Tour players who previously competed in the celebrated and historic event.

Sir Nick Faldo is one of the most successful and well-established players in Ryder Cup history, having represented Team Europe a record 11 times and winning 25 points. With many accolades to Faldo’s name including becoming, at the time, the youngest Ryder Cup player at the age of 20 and becoming Europe’s most successful player at the Ryder Cup, Faldo is certainly a player that strived under the atmosphere and pressure that exists in the contest.

Colin Montgomerie has represented Team Europe on eight separate occasions, in addition to captaining the side in 2010 as they triumphed against the United States in a 14½ – 13½ victory at Celtic Manor Resort in Newport, Wales. The Scotsman has been a part of five winning sides at the Ryder Cup, including an astonishing record of 20 wins, seven halves and nine defeats in 36 matches.

Ian Woosnam was vice-captain to Sam Torrance in 2002 and then went on to captain Team Europe in 2006, inspiring them to victory over the United States 18½–9½ at the K Club, County Kildare, Ireland. The Welshman has made eight separate appearances for Europe’s Ryder Cup team from 1983 to 1997 and he shares the record for most fourball points won with José María Olazábal on 10.5.

Thomas Bjørn made his Ryder Cup debut in 1997 and in doing so became the first ever Danish player to qualify for a Ryder Cup team. He was the Ryder Cup vice-captain to Bernhard Langer in 2004 and then went on to become captain in 2018 where he led Europe to a 17½- 10½ victory at Le Golf National, Paris, France. The Dane has made three appearances at the Ryder Cup and has been on the winning side on every occasion.

Paul Lawrie made his Ryder Cup debut in 1999 after he won the 1999 Open Championship, he then went on to represent Europe in 2012 in which he helped his side to victory overcoming the United States 14½-13½ after producing a stunning final-day comeback to win the Ryder Cup at Medinah Country Club, Chicago, United States.  The Scotsman became the vice-captain for the European Ryder Cup team in 2016, continuing his consistency and leadership throughout the years.

Paul McGinley arguably has one of the most memorable Ryder Cup moments as he holed a ten-foot putt on the 18th hole in 2002 against American Jim Furyk at The Belfry to win the Ryder Cup for Europe. McGinley became the first Irishman to captain Team Europe when he oversaw a memorable victory at Gleneagles in 2014.

Tom Lehman was the captain of Team USA in 2006 and has an abundance of experience, competing on three separate occasions including winning by a margin of 14½ to 13½ in 1999 as Team Europe led 10-6 heading into the Sunday Singles.

Darren Clarke was a member of five consecutive European Ryder Cup teams between the years of 1997 and 2006 and was victorious on four occasions. Clarke’s most noteworthy appearance was in 2006 as, following the death of his wife Heather who encouraged him to compete, he made a dramatic impact to the team, contributing three points from three matches. The Northern Irishman was named as the 2016 Ryder Cup captain after being selected by a five-man panel containing the last three Ryder Cup captains.

Mark James was a pivotal player for Europe’s Ryder Cup team on seven different occasions and captained the side in 1999. James was victorious in his 1989 Sunday Singles match against Mark O’Meara when the contest finished in a tie meaning that Team Europe retained the Ryder Cup, which they had won in 1987. He also won his Singles match against Jeff Maggert in 1995 as Europe went on to win the Ryder Cup by a margin of 14½ – 13½ on the East Course of Oak Hill Country Club in Pittsford, New York.

José María Olazábal was a member of Europe’s Ryder Cup team on seven occasions and captained the 2012 team in which saw the largest comeback in European history and also the biggest comeback from either team on foreign soil. The United States required only four-and-a-half points from the 12 up for grabs but the Europeans prevailed and secured eight and half to capture an historic 14½-13½ win at the Medinah Country Club.

Bernhard Langer was part of ten Ryder Cup teams between the years of 1981 and 2002, securing five wins and was the captain of the winning European team in 2004. The German was a key player in turning around the Ryder Cup fortunes for the European team and has a 21-15-6 record. Langer also has the record for the most foursomes points in the Ryder Cup with 11.5 and not only has Langer’s consistency been prominent throughout but his ability to withstand pressure and turnaround Europe’s dominance was key for Team Europe throughout the 80’s and 90’s.