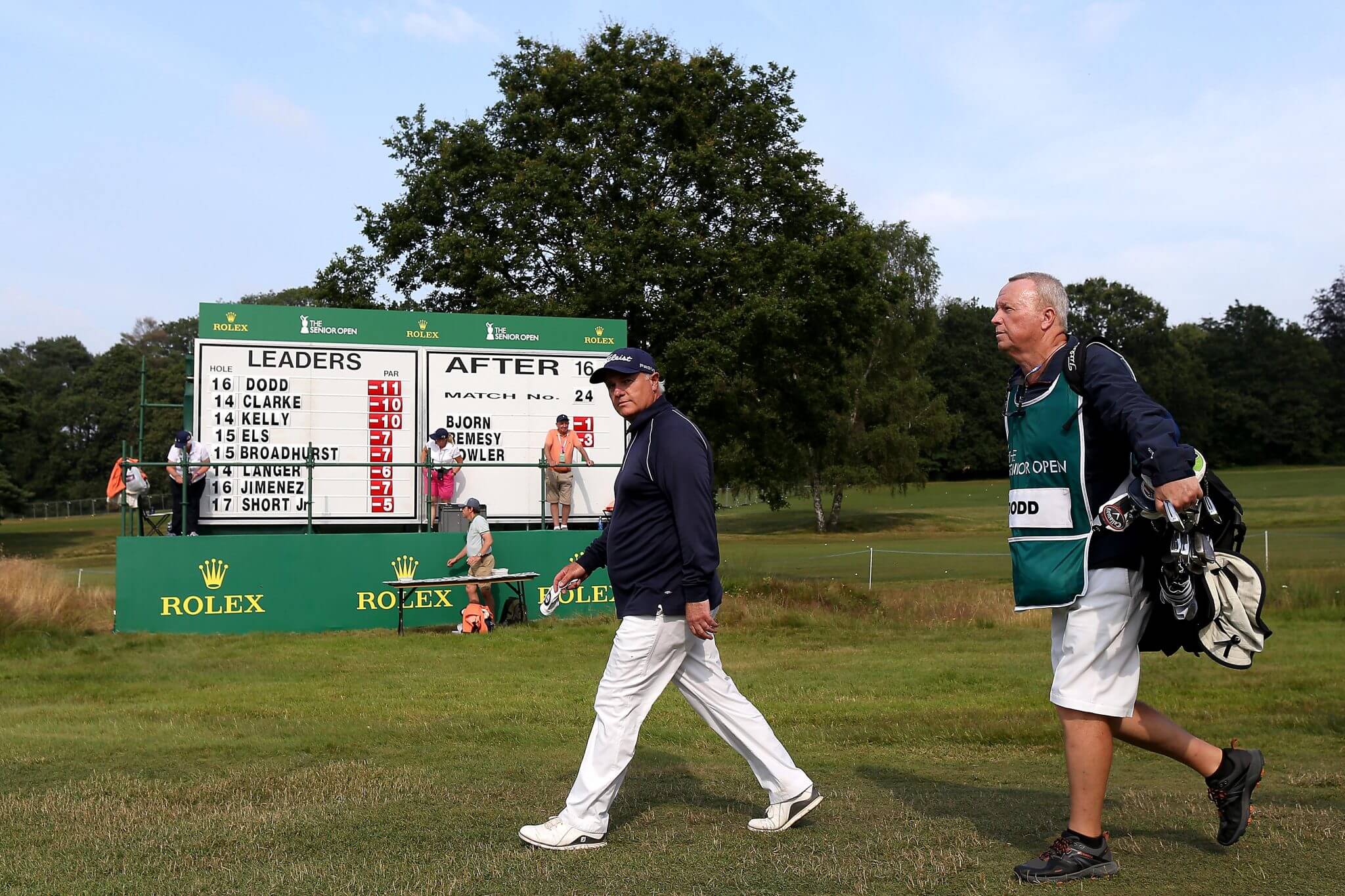 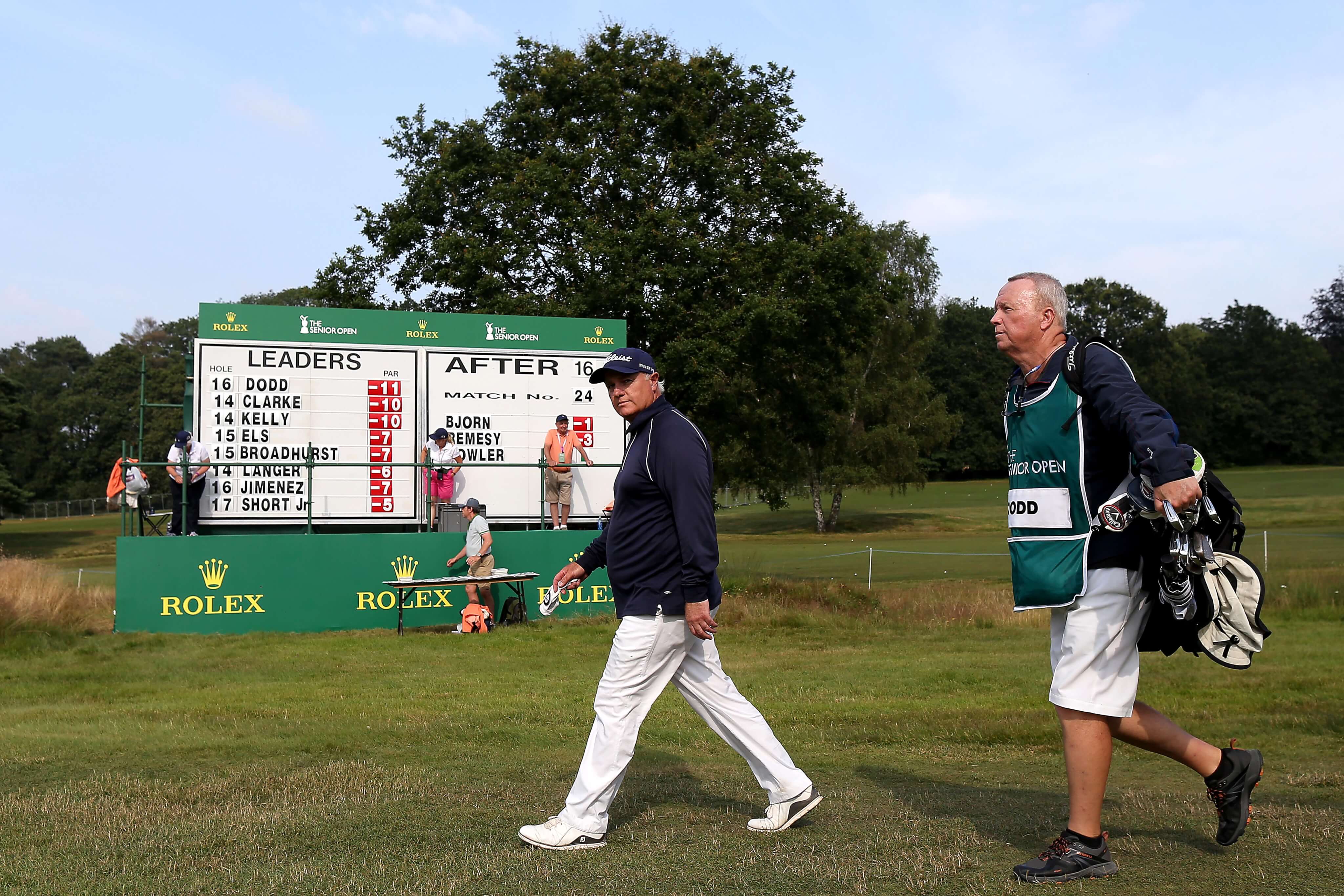 A thrilling final round is set for The Senior Open presented by Rolex with a chasing pack featuring some of the biggest stars of Senior golf.

Stephen Dodd will take a two shot lead after an impressive course record tying 62 on Saturday, but he’ll have to fend off a star-studded group of some of the game’s biggest players if he wants to lift the title at Sunningdale on Sunday.

Jerry Kelly, who won last year’s Bridgestone Senior PGA Championship, will enter the final round as the closest of those players, following a two under par Saturday 68 that included six birdies and four bogeys.

The American led the way for much of the third round after a fast start that included a run of three birdies from the second during a front nine 32, and although that momentum stalled on the back nine, Kelly was able to hold on to second place at nine under to book a spot in Sunday’s final pairing with Dodd.

“So, you know, a good one tomorrow, you don’t worry about today. So that’s kind of the mindset. I’m back in the Peloton, chase group one, I got to go after it.”

One behind Kelly is 2011 Champion Golf of the Year Darren Clarke, who still has a chance to become just the fourth player in history to win both The Open and The Senior Open.

The Northern Irishman got off to a fast start with two birdies in his first five holes, but a bogey at the fifth halted his momentum as Dodd and Kelly fought for position at the top. A birdie at the 12th briefly helped him regain a share of the lead but it was tee shot into the trees at the 17th which led to a double bogey six that proved costly for the man making his Senior Open debut.

“I wouldn’t be the happiest I’ve been this week,” Clarke said after an up and down for par at the last kept him within touching distance.

“I made a bad swing on 17. Trying to push it a little bit. Play was probably an iron off the tee. But decided to take driver, just had a bad shot.

Two time Senior Major winner Jimenez undoubtedly provided the moment of the day with a hole out albatross to open up his round, but he battled over the next 17 holes with three bogeys and three further birdies on his way to a third round 67.

“It was nice, it started with the first hole. But then everything just stopped,” said Jimenez, who admitted that he’s got to start rolling the putter better if he wants to have a chance at his first Senior Open title.

“I need to hole some putts. Be hitting good. And probably need to get a little bit closer to the hole. Everything is probably to hole some more putts.”

Paul Broadhurst lifted this title back in 2016, and the Englishman also said he has some work to do if he wants to content tomorrow following a one under 69 on Saturday.

“Felt a tough day.” Broadhurst reflected on his round, which included two birdies and one bogey.

“I just felt lines were not, you know, how I really wanted them. A lot to shots to 30 feet, 35 feet and just didn’t really have the pace of the greens. So tomorrow I’ve got start getting the yardages. Get my irons better, anyway. Just didn’t hit it close enough the last few holes to have any birdie opportunities.

“Coincidence the two majors I’ve won I’ve been four back, it’s not a position I’ve haven’t been in before, but you have some good days, and probably going to have to play well tomorrow to have a chance. It’s on. But you just got to hit the ball in the right place and just hope it’s your day.”

Meanwhile, defending champion Bernhard Langer – who is a two-time Major champion and 11-time Senior Major winner (including the Senior Open on four separate occasions), admitted that today was a mental battle for him. The German opened up with a birdie, but it took him 17 holes to find another at the last, dropping shots at the second and third holes on his way to a level par 70.

“It was a bit of a relief,” Langer said of his closing birdie as he admitted he really needs to be firing on all cylinders come Sunday.

“It’s been a real struggle today. Made a nice birdie on the first, two-putt birdie, and then just struggled there from there on. Hit some poor shots, got some really bad breaks. But just, yeah, didn’t make a lot of putts, didn’t hit a lot of real quality shots except some drives. Nice to see one drop in the end and get one closer to the lead.

“It’s always been difficult because it’s just frustrating, and when you think you should play better than you are. And the course was there for the taking. Conditions were beautiful. We didn’t have much wind. Just didn’t perform. So it’s a mental battle as well as anything else.

“I’ve got to do everything a little better. Got to hit the irons closer to the hole and make some putts. Still, somebody can go really low if you play well. But it’s that type of course. If you’re a little off, it can grab you. So I need to be on all four cylinders all 18 holes.”

Five shots behind the leader is two-time Open Champion Ernie Els, who like Clarke is making his Senior Open debut and has the opportunity to make history with a win at Sunningdale on Sunday.