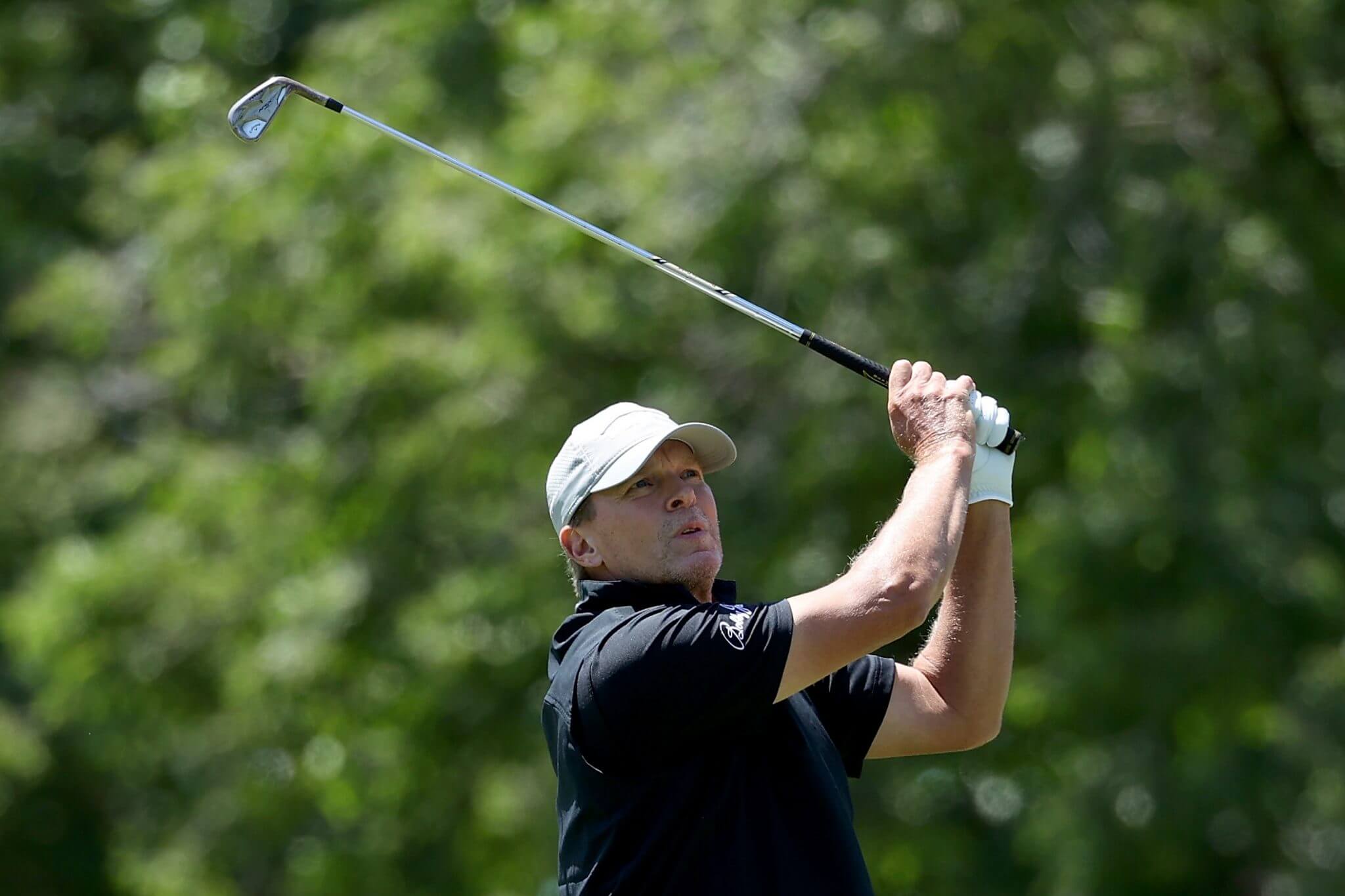 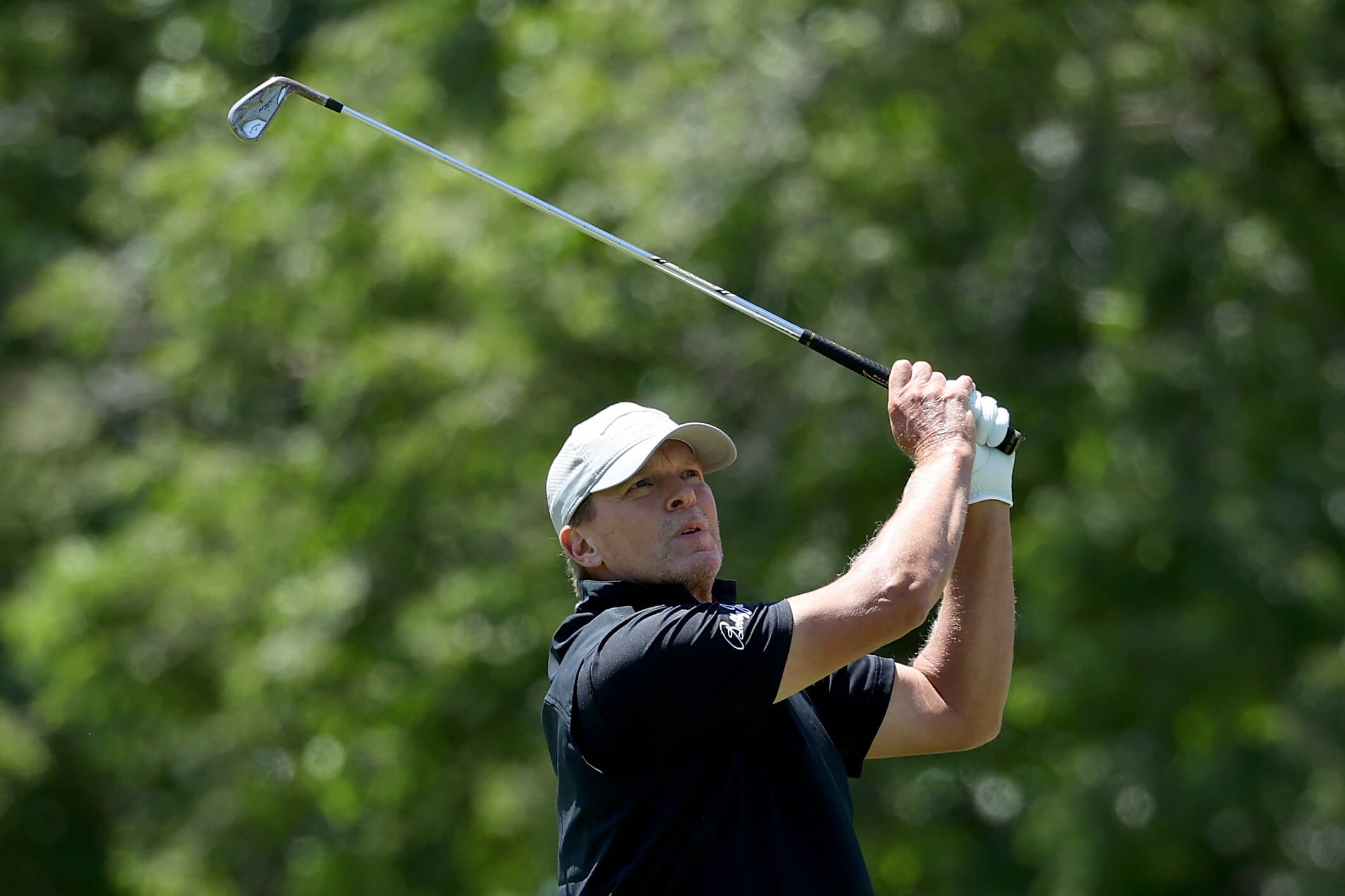 On a tough day at Southern Hills Country Club where only six golfers broke par, Steve Stricker, at one point, trailed by four shots.

But after a 3-under 67, the round of the day, he heads into Sunday’s finale leading by one at the KitchenAid Senior PGA Championship.

The 54-hole leader has gone on to win each time at all of the major championships contested at Southern Hills Country Club and Stricker, a two-time major winner on PGA Tour Champions already, is looking to continue that trend.

“It’s a tough place and it’s, it gets your attention on a lot of shots,” said Stricker. “So, it’s a great test and I feel good about what I did today.”

Stricker made three birdies in a row on No’s 3-5 on the front nine. He added another on the par-4 10th. Although he gave one back on No. 14, he pitched in from the bunker on the par-4 16th for a final birdie Saturday.

Once the pitch found the bottom of the cup Stricker raised his fist – it was the shot of the day.

While Stricker made the cut at the PGA Championship a week ago at the Ocean Course at Kiawah Island he finished tied for 44th – this week he’s hoping for more at the KitchenAid Senior PGA Championship.

Stricker will head into Sunday leading Alex Cejka by one and the KitchenAid Senior PGA Championship marks the second major in a row on PGA Tour Champions where Cejka and Stricker will be in the conversation near the end.

Cejka won the Regions Traditions in a playoff over Stricker earlier in May for his first PGA Tour Champions major title.

“I’m riding the wave,” said Cejka of his recent results. “Let’s hope I’ll ride it for a little bit.”

Mike Weir, who played with Stricker on Saturday and who entered the day leading the Championship by four after a 5-under 65 Friday struggled in the third round with a 4-over 74.

Weir was 1-under through nine holes but had three bogeys and a double bogey on the back nine en route to a 5-over 40.

“I’m not happy with the way things turned out today, but, yeah, I have a good chance tomorrow and it was one of those days,” said Weir. “It was a little bit of bad golf, a little bit of misfortune, the wind was difficult, there’s a little bit of guessing out there and I seemed to guess wrong quite a bit.”

Still, Weir is just three shots back of Stricker’s lead heading into the final round as he looks for his first PGA Tour Champions major victory. He’s third by himself through 54 holes and will be grouped with Stricker and Cejka for the final round.

“All in all, I feel good about my game,” said Weir. “I was a little bit off, missed a few short putts and just got to do a little better job tomorrow to have a chance and (Stricker is) playing great so I’m going to have to play well to catch him and so is (Cejka). He’s playing well too.”

Earlier in the week Weir said he was battling some upper body injuries (“Old man stuff,” he claimed with a chuckle) but said that wasn’t impacting his action now.

“I’m not a total hundred percent, but I’m feeling good, and it was nothing to do with my back,” said Weir.

Tim Petrovic, who shot a 2-under 68, and K.J. Choi, who is playing his first PGA Tour Champions major, round out the top five. Choi and Petrovic, at 1-under through three rounds, are the only other golfers in red figures in the Championship.