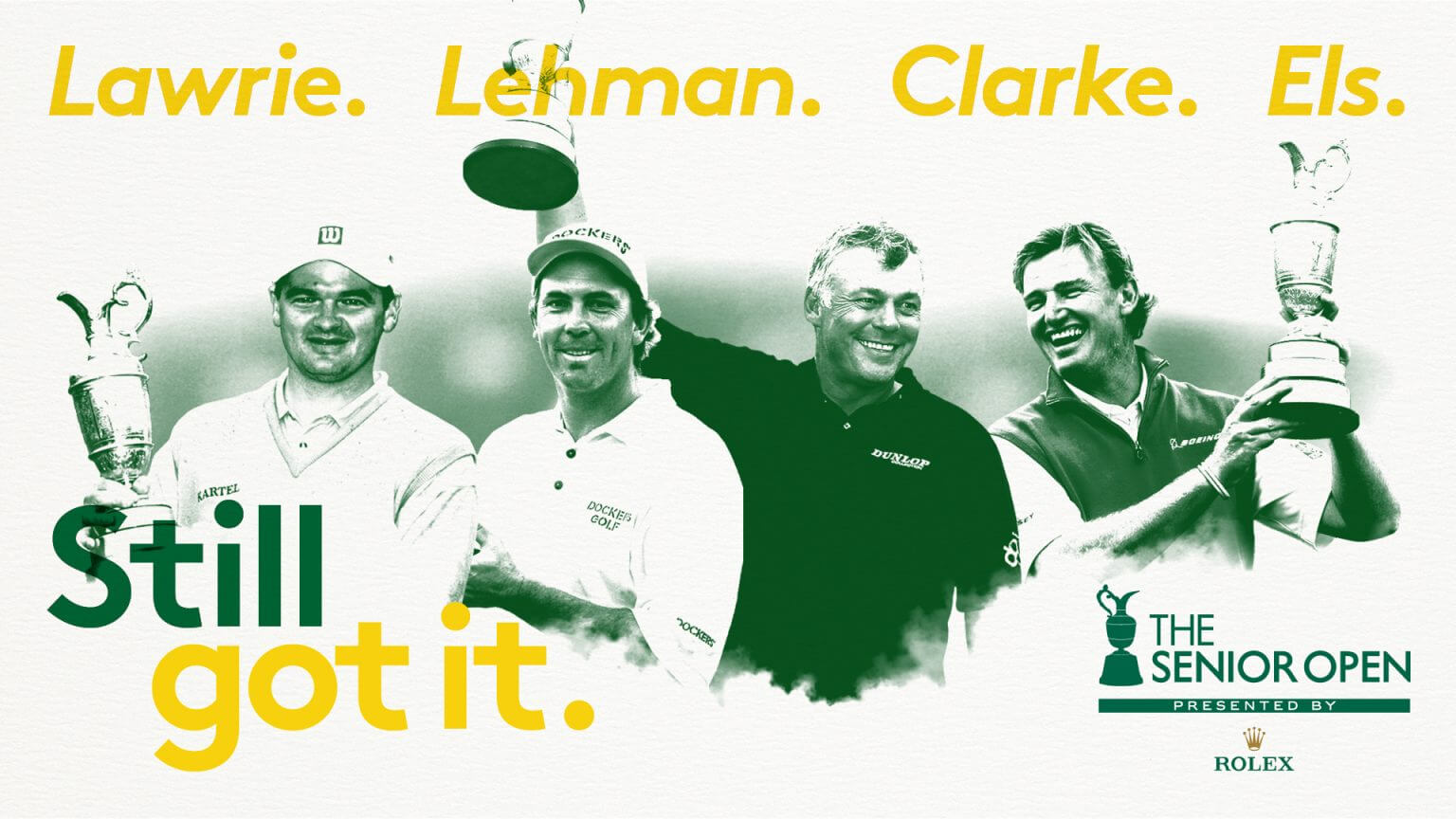 Darren Clarke, Ernie Els, Paul Lawrie and Tom Lehman, all former Champion Golfers of the Year, will bid to join an exclusive club by adding The Senior Open Presented by Rolex title to their triumphs in The Open when they tee it up at Sunningdale Golf Club from July 22-25.

Bob Charles, Gary Player and Tom Watson are the only players in the history of the game to win both The Open and The Senior Open and some of the biggest names to have claimed the Claret Jug will have the opportunity to add their name to the list next month.

Northern Irishman Clarke secured an emotional first Major Championship at Royal St George’s – the venue for The Open this year –  in 2011, dedicating the victory to his late wife, Heather, after securing a three-stroke victory over Phil Mickelson.

“The Senior Open is one of the highlights of the golfing calendar and I’m sure it is going to be another special week at Sunningdale,” Clarke said.

“The field has historically been incredibly strong and that shows just how highly this Championship is regarded by the players. So many people put a lot of effort into travelling over for this event and it makes you raise your game when you see who you are teeing it up alongside.

“To add The Senior Open trophy to my Claret Jug would be a dream come true and to follow in the footsteps of Bob, Gary and Tom would be incredibly special.”

Two-time Open Champion Els will make his Senior Open debut at Sunningdale Golf Club after turning 50 in October 2019 and will be eyeing a maiden Senior Major triumph.

“I am really looking forward to making my Senior Open debut later this month,” he said. “It is a wonderful tournament and Sunningdale is one of my favourite courses in the UK.

“Obviously we have a very strong field and it’s fantastic that the fans will be there too. It’s definitely shaping up to be a great week and I’m excited at having the opportunity to add my name to the list of winners on that beautiful trophy.”

Scotsman Lawrie, who triumphed in The Open on a memorable afternoon at Carnoustie Golf Links in 1999, won his maiden Legends Tour title at the Scottish Senior Open on his way to winning the Rookie of the Year Award in 2019 and now feels ready to contend on the Major stage.

“The Senior Open sits right in the middle of an exciting run of events for me and I can’t wait to tee it up at Sunningdale,” Lawrie said.

“Everyone knows Sunningdale is one of England’s greatest golf courses and it is going to be a real honour to play there in such a prestigious event.

“I enjoyed my first taste of the event in 2019 and I feel ready to give it a real go this time around. The quality of golf by the winners in recent years has been incredible and I know I’ll have to be at my best to be in contention.”

Lehman, who won the Claret Jug at Royal Lytham & St Annes in 1996 and captained Team USA in the Ryder Cup ten years later, previously teed it up in The Senior Open at Sunningdale in 2009 and 2015 and should he triumph later this month, he would become the oldest Senior Major Champion of all-time, aged 62.

“I really missed not being able to come over to the UK last year so I’m really excited to make the trip to Sunningdale later this month,” Lehman said.

“It was a fitting host venue when I played there before in 2015 and 2009 and it’s going to be really fun to play the Old Course again this year.

“I’ve always said I’d love to win this Championship. Winning any Major is awesome but this one just feels so special, with the history behind it and the guys who have won it in the past.

“I know just how passionate golf fans in the UK and it’s going to be great to play in front of them again. Hopefully the weather holds out and everyone has an enjoyable week.”

Ticket prices for The 2021 Senior Open Presented by Rolex start at £20 for the Wednesday practice day, while season tickets, offering access to all four Championship days plus the practice day, are priced at £100. Tickets can be purchased by visiting https://senioropen2021.eventbrite.co.uk. Due to limited capacity on-site, buying tickets in advance is highly recommended.

The only official sales channel to purchase tickets for The 2021 Senior Open Presented by Rolex is via the ticketing platform Eventbrite. The resale of tickets on unofficial platforms contravenes the European Tour’s ticket terms and conditions and such sales render the ticket void.