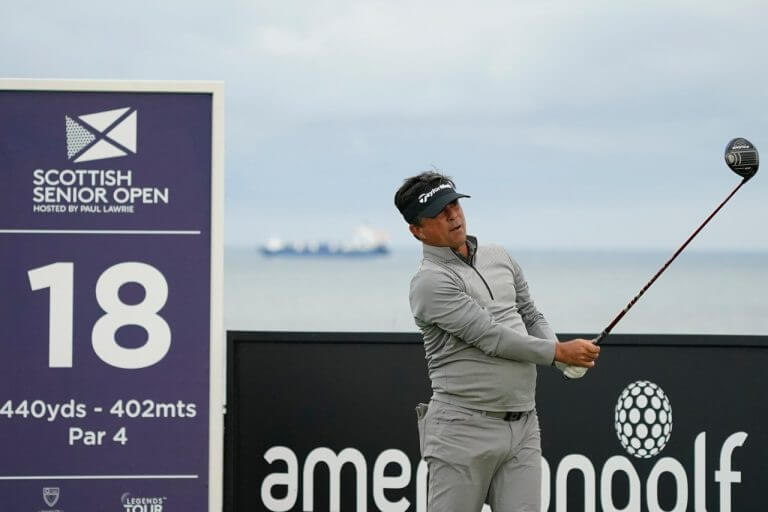 Morland IV leads on the links

David Morland IV will go in search of his maiden Legends Tour title when he takes a one-stroke lead into the final round of the Scottish Senior Open hosted by Paul Lawrie.

The Canadian added a two under par round of 69 to his opening round of 68 to reach five under par, one stroke clear of Englishman Peter Baker, Argentine Ricardo Gonzalez and Scotland’s Gary Orr, who share second place on four under par.

There was a delay of more than two-and-a-half hours at the start of the day due to heavy rain and fog and, although play was able to resume, the early groups had to battle the conditions to post a score.

“I got off to a little bit of a slow start but with the weather, the first couple of holes were when we had the downpour and we were wondering if it was ever going to end but then it cleared and got a little windier,” he said.

The 2020 Qualifying School graduate has three professional wins to his name and will tomorrow have to keep a chasing pack at bay to earn his first victory in Europe.

“I’m going to have to go low,” he said. “We’ve got a lot of good players crawling behind me but I’m just going to go out, play 18 holes, shoot as low as I can and add them up when I get done.

“I’ve won from being in front and from behind so I’ve done it both ways. You just try to get yourself in contention with nine holes to go, give yourself a chance to win.

“It’s been quite the journey. I finished second in France last week, flew back to St Louis on Monday to try to qualify for the Champions Tour, shot 68, missed by one, hopped on a plane at five o’clock to fly back here on Tuesday afternoon.”

The final round of the Scottish Senior Open hosted by Paul Lawrie will get under way at 7:30am local time.