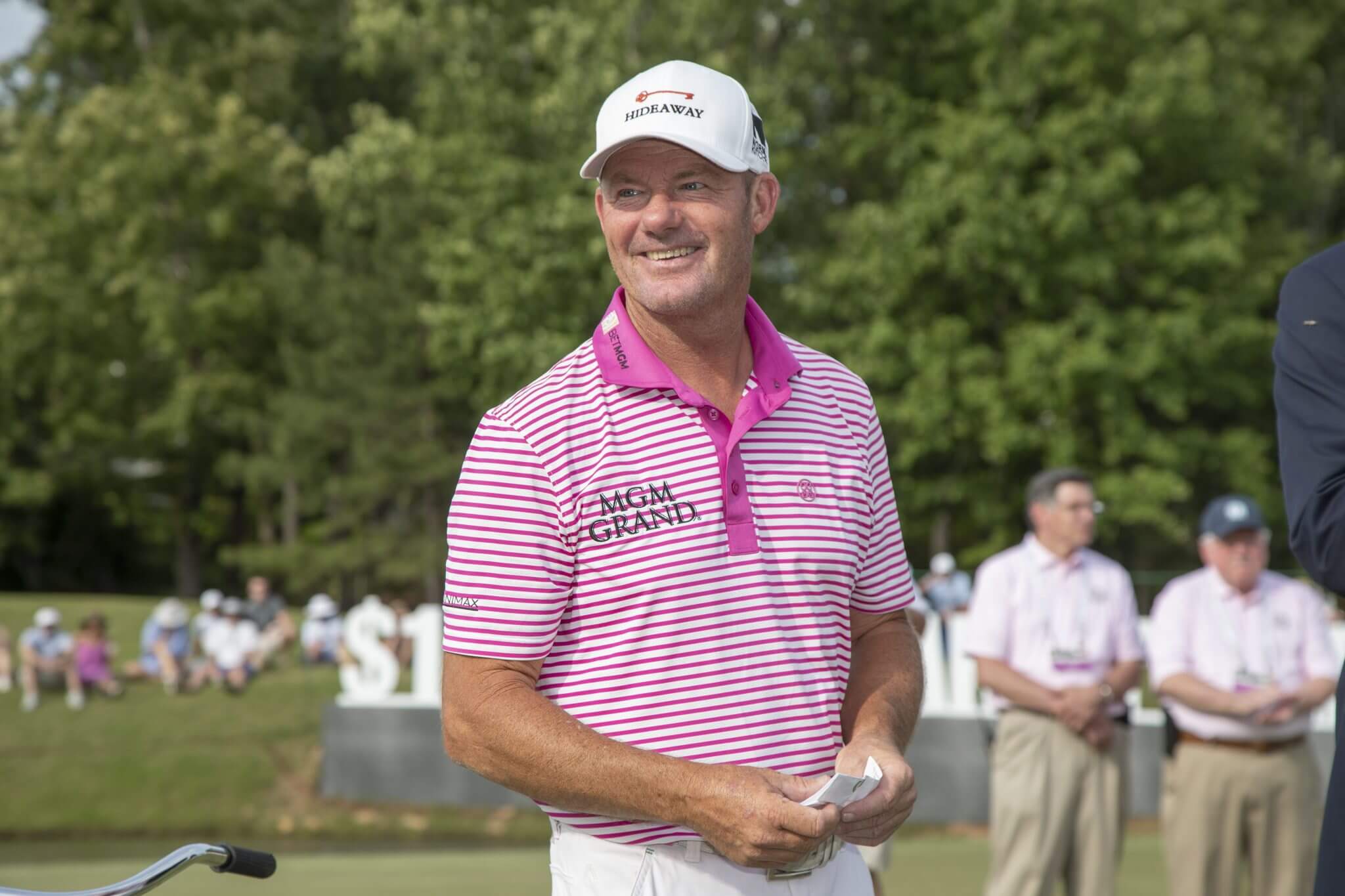 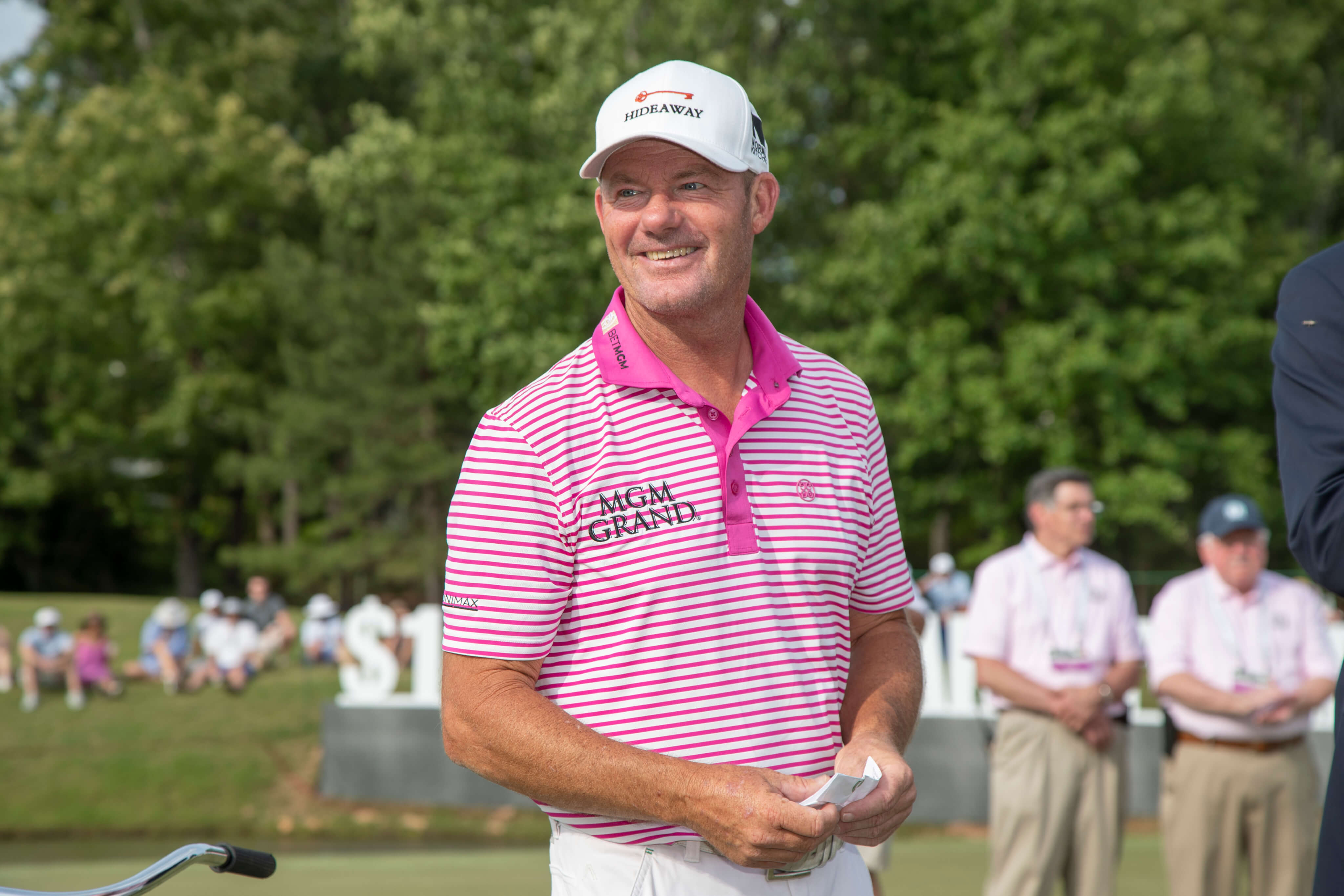 Another major, another leaderboard that features Alex Cejka.

Cejka, who captured the Regions Tradition on the PGA Tour Champions earlier this month, was back to his fine major play Thursday at Southern Hills Country Club. His 3-under 67 was good enough for the clubhouse lead before a suspension of play due to weather conditions at the KitchenAid Senior PGA Championship.

“I’m feeling great,” said Cejka. “I played great, we got a little bit easier conditions […] but the golf course is playing great, I played great shots, I hit a lot of fairways, a lot of greens, gave me a lot of good chances and I’m very pleased where I’m standing right now after day one so far.”

It was not the most auspicious start for Cejka as he made an opening bogey. However, he rattled off birdies on No’s 3-5 to get back into red figures.

Cejka said the key was his driving, as after some very solid tee shots he had short clubs into the greens early. The pins, he noticed, were tucked behind bunkers and in some “tricky” spots. But he managed to navigate those challenges well.

He kept it fairly clean on the scorecard for the balance of the day and added birdies on No’s 13 and 16 to put a bow on his 67.

“The back nine got a little bit trickier with the wind. I mean, it’s really challenging right now out there,” said Cejka of what could be expected in the afternoon.

Cejka finished tied for second at the Chubb Classic in April before his major triumph a month later. He said that good play, and winning a big event, has freed him up a bit.

“It gives you a little bit confidence, but you still have to grind, you still have to focus,” said Cejka. “There’s so many great players and everybody plays great, so you got to keep pushing, try your best and fight for every shot.”

Another PGA Tour Champions winner, Mike Weir, got off to a much better start but stumbled across the finish line on Thursday. He made four birdies in his first six holes but bogeyed No’s 15 and 16 to finish at 2-under early Thursday.

“Putted well today. I really rolled the ball well. That was the big thing,” said Weir. “I was confident before I won, but I think just getting one just feels great. I don’t know if it added a lot more confidence, I think it just felt great to see all the work kind of culminate and finally hoist a trophy that felt really good.”

Although it was perhaps not the finish to his round he would have liked, Weir, who won his first PGA Tour Champions event at the beginning of the month, credited the team in the fitness trailer for even allowing him to tee it up this week.

He said on Tuesday he was worried he wouldn’t be able to play.

“I mean, just old man stuff,” Weir said with a smile. “ I couldn’t move. I wasn’t moving well at all. I couldn’t even chip a ball.

“If (the guys in the fitness trailer) weren’t here, I wouldn’t be standing here. No way.”

But Weir (along with Miguel Angel Jimenez, who also finished with a 2-under 68 early) fell just short of Cejka on Thursday morning.

“I feel good the last couple of weeks in general with the whole game,” said Cejka. “Putting’s been great. Obviously to win tournaments you have to have the whole package. You got to drive well, chip well, putt well, you got to get lucky, and that’s part of the game too. So far, I’ve been hitting well, chipping well, putting well, hopefully I keep going like this.”