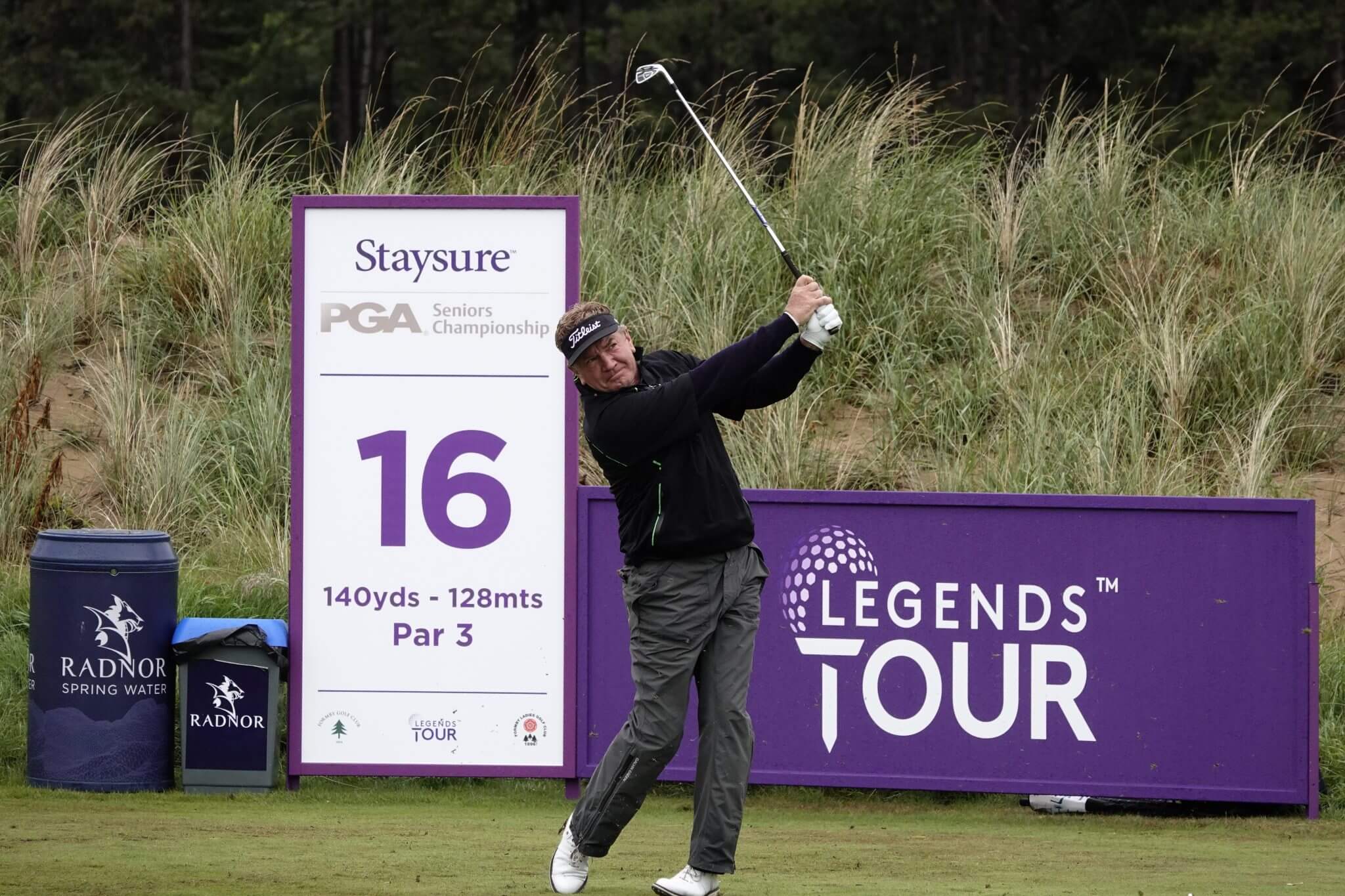 Broadhurst eyes silverware ahead of final day at Formby

Paul Broadhurst will go in search of his first win in almost three years as he heads into the final round of the Staysure PGA Seniors Championship with a share of the lead at Formby Golf Club.

The 55-year-old is tied with countryman Peter Wilson and Austria’s Markus Brier on four under par at the top of the leaderboard, with 1999 Open Champion Paul Lawrie and Irishman Brendan McGovern a shot back on three under par.

Broadhurst, a two-time Senior Major winner, made the most of moving day at Formby by posting a four under par round and it could have been one better if not for finding his first bunker of the day at the final hole which resulted in a dropped shot. Brier posted a level par round of 72 while Wilson could only manage a two over par round of 74, but still retains a share of the lead he held at the beginning of the day.

“Saturday is always moving day and I knew if we were going to have any chance I’d need to put a number on the board today and it’s always a bit easier chasing the leaders than holding a lead,” Broadhurst said. “It looks like the leaders have stumbled a bit today and it’s quite bunched now and all to play for tomorrow.

“I haven’t won since 2018 so it’s been quite a while. I’ve had the odd chance to win in the States and not took it. I got beat in a play-off in Phoenix. That’s what we play this game for. We’ve not come here to make the numbers up, we’ve come here to win and that’s what I’ll be trying to do tomorrow.”

Wilson will seek his maiden Legends Tour title on Sunday and with that would secure a career-changing category change.

“I’m really happy,” he said. “Being in the position I’m in to compete tomorrow to win, I’ve been in there before, so hopefully I’ll learn from my experiences. Today, I just didn’t hit the ball well enough, it was tough.

“Some of the pins were tucked away, I made one mental error but I just didn’t hit the ball well enough.

“It would mean everything to win tomorrow. I’ve got a friend of mine who is terminally ill and I said I’d try and win before he passes away. It would be great, for golf, it would sort out my category, and to get an exemption on this Tour would mean the world to me.”

An exciting finish is in store at Formby Golf Club, as 12 players sit within four shots of the lead. England’s John Bickerton, Argentina’s Rafael Gomez and Australia’s David McKenzie share sixth place on two under par, with David Morland IV, of Canada, Frenchman Thomas Levet and England’s Philip Golding on one under par in a tie for ninth.

The third round of the Staysure PGA Seniors Championship was played alongside the final round of the Alliance Pro-Am competition, where former Liverpool and England striker Robbie Fowler triumphed with 111 stableford points, six points ahead of Ian Timberlake and Stephen Jarrett on 105 points.

“I’ve loved it,” Fowler said. “The course has been magnificent and it helps when you play well. Winning dictates that you play well and I’m happy. I’ve played really good golf actually, with a few shots here and there, but I think I’m playing to my handicap and when you can do that, it’s good.

“I’ve absolutely loved it. It’s totally different to what we’re used to when we play with our friends on different courses, but when you play with these guys, the way they strike it is so clean and they make your life a little bit easier the way they are with you.

“I can’t thank the lads who I played with enough, they were all magnificent, giving little hints and tips now and again.”

The third round cut fell at 11 over par, with 61 players surviving to compete in the final round. Broadhurst, Brier and Wilson comprise the final group and will get under way at 11:40am.